Malt Nutrine- produced by Anheuser-Busch from 1895 to 1942 - was marketed as "nourishing liquid food" for nursing mothers, growing mothers, growing children, the aged and the weak. Pharmacist and grocers carried the product, which was advertised in doctor's offices and magazine. Malt Nutrine sold well until prohibition, when its barley malt and hops formula had to be altered to comply with the law. The reformulated tasted diminished Malt Nutrine's popularity, and in 1942, Anheuser-Busch ceased its production. Perhaps the greatest of the Malt Nutrine era is the artwork from the 1906 promotional calendar. Artist Maud Humphrey (mother of Humphrey Bogart) created the breathtaking images that graced the calendar's pages: portraits of women representing each of the four seasons. A fair-haired maiden amid blossoms and birds brings Spring to life in this second edition. The painting is set in an art nouveau frame adorned with snow-covered trees, holly berries and other icons of the season. Renowned stein artist Jim Wainwright designed this stein to reflect the artistic style of the calendar. Scrolled illustrations provides the backdrop for a vintage A&Eagle logo. The stein's handle reflects the pattern of the frame surrounding Humphrey's original artwork. The pewter thumb-rest is engraved with scrolling branches, and the pewter lid has a ceramic inlay featuring a close-up of the woman portrayed on the body of the stein. 11 1/2" tall. Made by Ceramarte of Brazil. Limited up to 15,000 individually numbered pieces. Gift boxed. 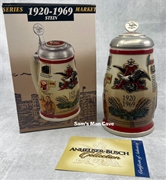 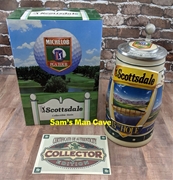